Background to the 1911 Railway Strike 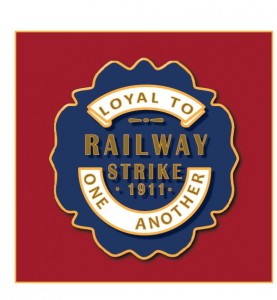 The industrial and community uprisings of Britain’s Great Unrest of 1910 to 1914 were the result of a complex of interrelated factors.

The 1911 strike wave was a working class response to a nexus of economic, industrial and political pressures and disappointed hopes. The Liberal government had heavily defeated the Conservatives, being elected in 1906 on the promise of widespread reforms. It promised a campaign against “landlords, brewers, peers and monopolists,” as well as launching schemes for national insurance and old age pensions.

29 MPs from the nascent Labour Party had also been sent to parliament with hundreds of thousands of votes behind them, carrying the hopes of many workers. But Labour in Parliament was to prove a huge disappointment,  its MPs tail-ending the Liberal Party on most issues. Wages did not increase, nor did the position of the mass of workers improve. In fact, by 1911 things were getting worse.

The 1911 strikes were for better pay but were also a protest against capital’s new strategy of  incorporating  labour movement and union leaders. The direct and uncompromising nature of the struggles are due  in part to the fact that they were not contained within the existing union organisation. They were a dual revolt, against employers on the one hand but against the established union leaderships and collective bargaining machinery on the other.

The new strategies, especially the fundamental strategic innovation of the period, the solidarity strike, were developing as ways of exerting maximum pressure by rank-and-file workers. The rising level of struggle created a split  not only between workers and both employers and the state, but also  between the workers and their official leaderships in the unions and the Labour Party.

Direct action seemed to many workers  the way forward. The ideas of revolutionaries – syndicalists like Tom Mann and Ben Tillett, the latter of whom spoke at Llanelli at a demonstration to protest against the shootings – suddenly resonated for many. Next I shall look at the controversial issue of the syndicalists. Who were they? Did they influence the fightback at Llanelli?

By 1890 south Wales had one of the most densely developed railway networks in the world. But this was run in a context of widespread poverty and hardship for railway workers.

In Remembrance of a Riot, John Edwards shows that at this time wages in general were low and working hours long.  “In 1911… almost a third of all adult males earned less than twenty-five shillings a week, about the absolute minimum required to keep a family and three children. Most workers worked twelve hours a day for this kind of money and their daily lives, apart from Sunday, consisted of going from bed to work, and from work to bed…even a small measure of income above the minimum made a striking difference to living standards”.

Although the railway companies were flourishing and their shareholders receiving very healthy dividends, their employees were less well looked after. Two thirds of the workforce worked for at least sixty hours a week over six days, with most of the others working seventy-two hours.

Robert Griffiths, in his study of the 1911 strike, Killing No Murder, estimates that for this, “A porter, platelayer or general labourer  at the Great Western Railway’s Llanelli station…would have been rewarded with 17s…a shunter would be entitled to 20s. Even the engine driver, upon whom so many lives depended, would earn little more than 28s a week– less than the average coalminer. From these miserable sums a total of 1s 2d would then be deducted for sick pay, pensions and widows’ and orphans’ funds  – all administered by the company…the directors of the railway companies pointed out that employees benefited from such ‘indirect advantages’ as free or cut-rate travel…and tips.”

Yet the amount of capital tied up in Britain’s growing railway network had grown from £860 million in 1890 to £1,229 million in 1905: total receipts from freight and passenger traffic had rocketed from £73 million to £250 million a year. In 1907, for example, the companies spent £30 million on wages while making £45 million in profits.

In August 1911 the publication of the railway companies’ half-yearly financial reports showed that they were making record profits and handing out substantial dividends. On August 10 the Great Western Railway Company raised the dividend rate on its ordinary stock from 4 per cent (already up from 3.5 per cent in 1910) to 4.5 per cent in the light of ‘buoyant’ profits – an increase which on its own could have funded a 5 per cent pay increase of one shilling a week for most GWR employees.