The Army and the Strikers 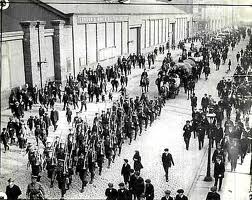 Using the army against strikers during the industrial rebellions of 1910-14 was always going to be a risky business for our rulers. Earlier clashes had shown the problems in militarily suppressing protest. In the “Peterloo massacre” of 1819 in Manchester, cavalry charged into a crowd calling  for parliamentary reform and an extension of the vote, killing 15 and injuring 700. “Peterloo” (so named in ironic reference to the battle of Waterloo, 4 years earlier) was an embarrassment for the government and the military and a huge political issue. “The defining moment of its age,” said the historian Robert Poole.

In the long term ‘Peterloo’ boosted the reform movement, although, interestingly, the government’s first instinct was to crack down on similar protests. In the aftermath of the killings they rushed through the so-called “Six Acts”, labelling any meeting for radical reform an “overt act of treasonable conspiracy”!

With the growth of industry and the factory system, using the military to directly suppress protest became more problematic. The capitalist mode of production revolutionised daily work and everyday life, and created a new “working class”, drawing together hundreds of thousands of men, women and children to work in its mills, factories and mines. Modes of protest were likewise transformed. Instead of the food riot or the direct action of small, often clandestine groups like the Rebecca rioters, came the growth of mass action, mass strikes, the mass picket and demonstrations.

Clearly the old tactics of killing, transporting and executing was not going to work any more against an urban working class. The days were gone when a judge could calculate how many rioters needed to be executed to put down a popular uprising. In urban areas, sending in soldiers, who had, after all, been trained to kill, against a demonstration of thousands might well be counter-productive. The problem for  governments lay in the possibility that, by violently suppressing a demonstration and killing protestors it might transform a movement which was calling for reforms  into one which was calling for revolution. There was also the problem that the class divide also existed in the army, with officers drawn from the landed aristocracy. The ordinary soldiers, who came from the working class, often endured harsh regimes of punishment and flogging. There was always the fear they would identify with the people they had been sent to suppress.

By 1911 the police had taken over most of the overseeing of popular protest. But in times of crisis the government still retained the military option. Next I shall look at the man who refused, at Llanelli, to fire on the crowd – “the soldier with the gun at his side”, Private Harold Spiers of the Worcestershire Regiment. Harold Spiers, a private in ‘G’ company of the first Battalion of the Worcestershire Regiment, came from a family which was proud of the fact that all its men had been soldiers. Harold (second from the left, front row in the photo, probably from 1914) had followed in the footsteps of his father and two older brothers when he enrolled. After serving his apprenticeship in the family’s bicycle business at Redditch, he enlisted as a professional soldier with the Worcesters in July 1909 at the age of 20. Yet in two years’ time he would be arrested and placed under military guard at Llanelli for refusing to shoot a man sitting on a garden wall.

In his statement to police he said he had been in the firing party ordered to defend the railway line ‘against rioters’. He was ordered by his commanding officer: “You see that man on the wall. Shoot him.” This was in all likelihood John John. He refused to obey the order. Press accounts recounted that he said he would not shoot somebody ‘in cold blood’ – had the man thrown a brick or a bottle at him, it would have been different, he said. He had been arrested, and after the soldiers had retreated to the railway station he was held there in custody. However, during the chaos after the massive explosion and fire in the goods yard he managed to escape.

He then, it appears, walked from Llanelli to mid-Wales – to New Radnor, on the English border, a distance of nearly 90 miles, eating apples, nuts and blackberries on the way. He threw away his service cap on the journey, but was dressed in the regulation khaki trousers, a shirt and heavy boots when he was discovered by Sergeant Evans on Monday, August 21st by the wall of the Eagle Hotel, New Radnor, exhausted and vomiting blood on the pavement. He admitted that he was a deserter from the army, and recounted the remarkable events that had taken place the previous Saturday in Llanelli.

On Thursday he was handed over to the military authorities and taken to Cardiff Barracks, where on Friday, August 25 he was accused of “desertion whilst in aid of the civil powers.” He insisted again that he had refused an order to fire (at a previous hearing the magistrate had ordered that the reasons for his desertion were not relevant to the court and should be deleted from the public record). He was remanded for a district court martial.

Meanwhile, excited news of the soldier who had refused to fire on workers was spreading, especially through the trade union and labour movement. Next week I shall  look at the campaign which had as its rallying-call “Free Private Spiers!”

Much to the embarrassment of the authorities, the case of Private Harold Spiers – the soldier who refused to fire on the Llanelli strikers – rapidly became a cause celebre in the British trade union and labour movement in the month after the shootings. The railwayworkers of Llanelli and Swansea expressed their admiration for his heroism and called on the nascent Labour Party to campaign for his release from custody.

…the colliers called for his release…

The Cambrian colliers (who in 1910 had battled the police at Tonypandy) passed a resolution congratulating Spiers for his courageous stand. Penygraig Independent Labour Party went on record to “record our admiration for Private Spiers for refusing to shoot…the courage displayed by him deserves the highest praise… we demand his immediate release.”

Ramsey MacDonald, the Labour MP for Aberavon, said he would pursue the case. Justice, the paper of the Social-Democratic Federation, opened a defence fund. In the left-wing newspaper Clarion a poem appeared called The Great Refusal of Harold Spiers – Hero which contained the lines: “’Shoot straight, boys!’ the officer shouted/’The ringleader, there is your man,/These strikers deserve to be routed,/Twas well till their trouble began;/…So shoot for old England, your mother,/Deserters the world will deride’./He answered ‘I shoot not my brother’,/And stood with his gun at his side.”

Spiers was emerging as a working-class hero. The authorities realised they had to put a stop to this: they were already on the defensive as far as the bungled military operation in Llanelli had gone – six people dead, many injured, the property of the Great Western Railway Co set ablaze. As John Edwards shows in his excellent book Remembrance of a Riot , some sort of deal was clearly struck, for when Spiers was at last court-martialled on Friday 22nd September – his defence lawyer paid for by Llanelli Trades Council – the army had dropped the charge of ‘desertion’, to be replaced by a charge of “absenting himself without leave” – a much less serious charge. Spiers served only fourteen days military imprisonment. Although, as I will show next week, the government and the army took very seriously the danger of mutiny by soldiers who were sent to suppress industrial disputes, they clearly decided that this case needed to be brushed under the carpet as quickly as possible. The last thing they needed while strikes and rebellion were spreading across the country was another ‘martyr’ – another campaigning focus for people’s anger.

Harold Spiers’ parents wrote a moving letter to the Llanelly Mercury thanking “the Llanelly people for their kindness towards our son” and for paying for his defence. “We are sure people that we had never heard of nor seen turned out to be the greatest and best of his friends.”

Determined efforts were made by the government to bury the case of Harold Spiers. In reply to a question about the fate of the soldier who refused to fire at Llanelli, Colonel JEB Seely, the under-secretary of state at the War Office, twice denied that such a soldier existed. But early in 1912 further events thrust the case of Harold Spiers back under the spotlight.

The use of the military during the rail and transport strikes of 1911 presented the British labour movement with a problem. What attitude should striking workers adopt to soldiers who were being used to break strikes? What strategy would be most effective when strikers were confronted with the armed forces of the state?

At the beginning of 1912 a railway worker named Fred Crowsley distributed at Aldershot barracks a leaflet with the headline “HALT! ATTENTION! Open Letter to British Soldiers.” It said the following: “YOU ARE WORKING MEN’s SONS. When WE go on Strike to better our lot, which is the lot also of YOUR FATHERS, MOTHERS, BROTHERS, and SISTERS, YOU are called upon by your officers to MURDER US. DON’T DO IT!…The Idle Rich Class, who own and order you about, own and order us about also. They and their friends own the land and means of life of Britain.YOU DON’T KICK. WE DON’T. When WE kick, they order YOU to MURDER us. When YOU kick, YOU get courtmartialed and cells. YOUR fight is OUR fight. Instead of fighting AGAINST each other, WE should be fighting with each other.”

Crowsley was arrested and the leaflet confiscated. But then the radical workers’ newspaper The Industrial Syndicalist reprinted the leaflet in full. The chair of the paper’s publishing board, the industrial militant Tom Mann, was now arrested as well, along with the paper’s manager and two printers. They were charged under the Incitement to Mutiny Act, prompting the Labour MP Keir Hardie to refer in the House of Commons to “the Llanelly case, during the recent railway strike, when two men who were not participating in what happened and when there was no riot in any legal sense of the word, were shot dead…in giving advice to the soldiers not to shoot their brethren who were on strike, we are trying to save them from the commission of murder.”

Tom Mann was sentenced to six months’ imprisonment. The case attracted much publicity, and after seven weeks of militant campaigning by the labour movement he was released. In September 1912 the Trades Union Congress demanded a public enquiry into police and army excesses at Llanelli and at Liverpool, where another two men had been shot dead during the transport strikes.