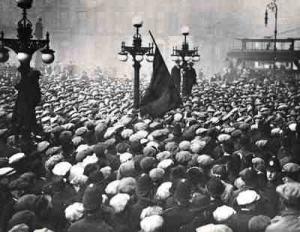 What was really scaring the authorities at the time of the Llanelli Uprising of 1911 was the fact that strikes and riots weren’t just happening in Llanelli. This was the time of the ‘Great Unrest’ – one of the longest periods of sustained industrial rebellion in British history. Industrial militancy was spreading nationwide, and being driven by rank-and-file workers. Beginning in 1910, and initially centered on the South Wales coalfield, workers across Britain and Ireland (and in other countries, including Spain, France and America) – dockers, seamen, miners, transport workers, railway workers and others – became engaged in increasingly bitter confrontations not only with their own employers but with the state machine itself.

In Britain the period from 1899 to 1907 had been a period of industrial peace unparalleled between 1891 when statistics started, and 1933. The sudden  wave of strikes bursting out from 1910 -14 caused George Askwith, the main conciliator with the Board of Trade , to write, “One shipowner in Hull spoke of revolution, and so it was. I heard one town councillor remark that he had been in Paris during the Commune but had never known anything like this”. In August 1911 the militancy of the general transport strike in Liverpool impelled the lord mayor to ring Lord Derby at the War Office to say: “this is no ordinary strike riot – a revolution is in progress”. The government rushed two war ships to the Mersey, their guns trained on the centre of Liverpool. King George V sent a message to Winston Churchill the then Liberal Home Secretary: “Accounts from Liverpool show that the situation there is more like revolution than strike…(Troops) should not be called upon except as a last resource, but if called upon, they should be given a free hand and the mob should be made to fear them”.

While a note of hysterical outrage creeps into these reports, the assessment of the seriousness of events was not just the hyperbole of a badly rattled British ruling class. The Russian revolutionary Lenin wrote: “… the railway strike of 1911 displayed the ‘new spirit’ of the British workers…In Britain a change has taken place in the relation of social forces, a change which cannot be expressed in figures, but which everyone feels…the British proletariat is no longer the same. The workers have learned to fight.” His comrade Leon Trotsky,  the leader of the revolutionary Red Army, writing in 1924-5, said: “1911 to 1913 were years of unparalleled class battles by miners, railwaymen and other transport workers. In August 1911 a national, in other words a general strike developed on the railways. During those days a dim spectre of revolution hung over Britain.”